What Is Wrong with the Accounting?

The reason that accounting estimates of environmental debt are so inaccurate is that oil companies cannot reliably estimate future asset retirement and cleanup costs using the methods specified by accountants.  Rather than using historical cash flows to predict future cash flows, accountants ask companies to predict the future tabla rosa without reference to the past.

For financial reporting purposes, the fair value of AROs is measured using an expected present value method.  Expected present value starts with expected value, a set of probability-weighted cash flows that, in theory, represents all possible cash flows.  In other words, oil companies are in theory supposed to predict the probability that a hurricane will strike an oil platform in the Gulf of Mexico 30 years from now and then estimate the additional decommissioning costs that this will entail.  Management simply cannot be expected to produce liability estimates that rely on highly speculative and potentially prejudicial information.  Neither can management be expected to produce, at considerable time and expense, detailed engineering cost estimates for decommissioning activities that will take place 15, 30 or 60 years hence and continually update these estimates to reflect changing legal requirements, physical conditions, and labor and equipment costs. 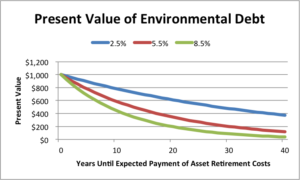 Errors in measurement of asset retirement costs are compounded by the effect of discounting.  ARO liabilities are discounted present value estimates.  The use of discounting introduces the opportunity to further distort already unreliable cost estimates.

Discounting cash flows over long periods can have a deceptively large effect.  (Click here to watch animated video.)  For example, assume an oil company constructs a new offshore oil platform with an estimated useful life of 30 years.  Management’s estimated asset retirement costs are $500 million in current dollars and management’s estimated inflation rate over the estimated useful life is 1.5 percent.  The present value discounted at 5.5 percent is only $157 million.  Discounted at 8.5 percent, the present value is only $68 million.  What if oil companies use widely different interest rates to discount the same obligations?  What if the “too late too sudden” scenario happens and debts with 30-year maturities become immediately due and payable?

Errors in the underlying cash flow estimates can be greatly amplified by the effect of discounting.  If an oil company’s undiscounted ARO cost estimates are understated by a factor of 10 and discounting further reduces those cost estimates by a factor of 10, actual undiscounted asset retirement costs are 100 times greater than reported AROs.  For a detailed explanation of ARO discounting, see Accounting for Environmental Liabilities in Bankruptcy, American Bankruptcy Institute (2016).