The Financial Stability Board, the Bank of England and the European Systemic Risk Board have all recognized that the disorderly re-pricing of $100 trillion of carbon-intensive financial assets due to climate change poses a systemic risk.  The Bank of England has described it as a risk “particularly relevant” to a central bank’s ability to meet its financial stability objectives. 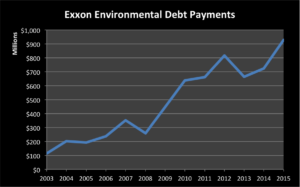 To date, financial markets have focused on carbon-intensive assets, most recently, the possibility of “stranded assets”.  But there is another side to this coin.  Largely overlooked thus far are carbon-intensive liabilities for asset decommissioning, known as “asset retirement obligations (AROs).”  AROs attach to carbon-intensive assets at birth like a birthmark and remain until death.  The pair are inextricably bound throughout the asset’s economic useful life.  Until, finally, when the asset can profitably produce no longer, the debt comes due and must be paid.  The same climate-related forces affect both sides of the coin because the two cannot be separated, not even in bankruptcy.

The mispricing problem has two components—(1) double-digit compounding annual growth rates in environmental debt payments from 2003 through 2015 (2003 is the first year of available data), and (2) reported accounting estimates that materially under price the growing annuity needed to extinguish existing AROs.  The major U.S. oil companies illustrate the scale of the problem.

Exxon’s environmental debt includes cleanup liabilities but consists mostly of statutory obligations to decommission, plug and abandon its production assets at the end of their economic life.  Independent data suggests Exxon has more than 30 years of accumulated AROs to pay off.  What is the present value of the cash flows required to extinguish 30-plus years of accumulated AROs?  A fair value “price” to transfer Exxon’s existing environmental debt to a third party, assuming the continuation of historical payment growth rates over the next 30 years, could exceed $500 billion.  That amount is well in excess of Exxon’s current market capitalization. Yet, Exxon’s balance sheet reports environmental debt of only $15 billion. 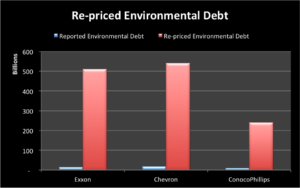 To help illustrate the severity of the risk under different scenarios we have developed an interactive model that allows you to re-price the environmental debt of Exxon, Chevron and ConocoPhillips using discounted cash flow analysis.  You can select from a range of assumptions about the timing and amount of future cash flows to decommission, plug and abandon existing production assets.  The model is preloaded with company-reported data on historical environmental debt payments and growth rates as well as benchmarks for the expected period over which payments will be incurred to extinguish accumulated AROs.

We focus on Exxon, Chevron and ConocoPhillips because they are bellwethers for the global industry.  If these well managed companies have unsustainable AROs, can we expect anything different from the rest of the industry?

To grasp the global scale of the issue, consider that average reported AROs as a percentage of debt for the three U.S. Majors is 36%.  This is consistent with a 2007 S&P report that found a 50% ARO/Debt ratio for the industry.  In 2015 the IMF reported that, “The outstanding worldwide notional value of bank loans and corporate debt extended to the energy sector amounts to about $3 trillion.”  Similarly, in March 2015 the Bank of International Settlements reported that, “The total debt of the oil and gas sector globally stands at roughly $2.5 trillion.”  Assuming total sector debt of $2.5 trillion and a 40% ARO/Debt ratio, expected AROs would be about $1.0 trillion, as reported in corporate financial statements.  However, our model indicates that reported AROs may underestimate actual costs by more than one order of magnitude.  Assuming actual costs exceed accounting estimates by 10X, the total environmental debt of the oil and gas sector globally may approximate $10 trillion.  The degree of misestimation, insufficiency of disclosure, scale of liability, and potential for precipitating a downward spiral in asset valuations, collectively, pose a systemic risk to financial stability.